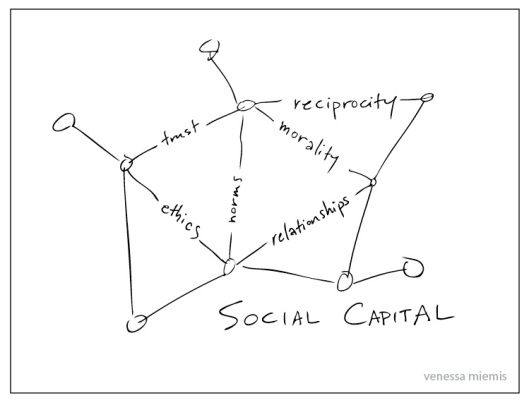 I recently read a post by Brian Solis titled Social Capital: The Currency of the Social Economy, which served as the catalyst for one of the most entertaining Twitter conversations I’ve had so far. I personally had a problem with the way the term “social capital” was used in the piece, which was inspired by the definition given to it by Tara Hunt in The Whuffie Factor. The reason I had a problem was that “social capital” already exists as a sociological concept that’s been in development for many years, and to now boil it down to an equivalent to “reputation” didn’t seem appropriate. And so I tweeted the sentiment. A lively discussion ensued with all kinds of people chiming in, including Brian Solis and Tara Hunt themselves. (Even Umair Haque from the Harvard Business Review made a cameo appearance. fun!)

Below I’m going to “unpack” Brian’s post a bit, and inject some thoughts that came to mind when reading it. The reason for this is to foster dialogue. We’re in the middle of a transformational age, and in order for us to effectively co-create new models of operating, we need to have a shared language. It’s not about who’s right or wrong – it would be incredibly small-minded to put an individual down. Instead, I want to show that different perspectives on these ideas/terminologies exist, and we should acknowledge and talk about what we’re actually trying to say and where we’re trying to go. It’s important if we want to make progress, so here we go.

The piece starts with:

The convention for creating financial opportunities is evolving and changing the way we seed prospects, promote our expertise and prowess, and connect with those who can help us learn and advance through the facilitation of strategic and mutually beneficial alliances.

translation: There are emerging methods for exploiting connections in order to make money, promote ourselves, and get ahead. ok so far…..

Digital capitalization is laying a foundation for expanding the need to cultivate and participate, not only in the real world, but also in the online networks and communities that can benefit us personally and professionally.

In an era of democratized publishing and equalized influence, it can be said that engagement and participation are a new, powerful and effective form of “un” marketing. At the very least, this is an epoch of empathy.

Maybe I’m just being picky here, but we don’t have universal access to the internet (yet), so I disagree with the statement of democratized publishing. And even if there was, for the sake of argument, we don’t have universal “digital literacy,” or understanding of how to effectively use the tools at our disposal, therefore we do not have access to equalized influence. But anyway, up until this point I was following the argument, and understood what he was trying to say. But then:

Social capital is a strong ally, an elite catalyst for lucrative relationships, and now a metric for qualification, consideration and ultimately success (however you define it). This is a state of human economics that is thoroughly discussed in Tara Hunt’s book, The Whuffie Factor. Our “Whuffie” or social capital and intellectual assets are defined by both online and real world conduct and its “balance sheet” is available for anyone with a web browser to review, assess, and analyze.

This is where things started to break down for me. Maybe this whole post is moot, because ultimately we’re talking about two different definitions here, but I want to address the discrepancy. In this paragraph Solis does 2 things that trouble me:

1. he equates social capital with “whuffie”
2. he uses the words “metric” “assets” and “balance sheet”

First point: He references the book The Whuffie Factor as his source for this definition. The author, Tara Hunt, describes whuffie as social capital here, saying you earn it by being “nice, networked, and notable.”

The thing is, to me this sounds like describing reputation, not social capital. I believe the idea of social capital was first proposed by Marx back in 1867, but I’m not even going to pretend to be able to speak to his writings. Socioeconomic theory is not my forte. Instead, I’ll skip ahead to three modern social capital theorists – Coleman, Putnam, and Fukuyama – and their definitions.

“social capital is the set of resources that inhere in family relations and in community social organization and that are useful for the cognitive or social development of a child or young person” (Coleman 1994: 300)

I’ll build this out a bit more, but based on these quick definitions, it becomes apparent that social capital and reputation are not equivalent things. Social capital is something embedded within networks, not something directly tied to an individual’s status. Moving on.

Second point: Using those quantitative words (metrics, balance sheet) leads the reader to the conclusion that this is something that we will want to measure. Let’s put aside the term social capital for a moment (since social capital is immeasurable) and look instead at what they’re talking about – reputation.

If we decide that reputation is the new “currency” of the social economy, and decide to attach a number to it, I’m going to suggest that that would undermine the entire premise itself, instead resulting in commodity fetishism. (Neither Solis nor Hunt directly suggests attaching a number to it, but I’m just pointing out that if we talk about this using economic words, people will be led to develop it accordingly.) I’m just trying to think ahead here. What Hunt is trying to promote is a return to human-centric practices in business and leading from underlying human values. (One of the tweets she sent me was a link to this post of hers, which indicates as much) I think that’s what we’re all trying to do – I’m just cautioning that people may abuse this premise if it’s meaning is cloaked in economic metaphor.

Skipping ahead a few paragraphs:

Like any form of capital, Social capital rises and falls with the market and the individual to which it’s governed by the state of the industry and affected by the state of corresponding affairs. As it escalates, however, it unlocks opportunities that are commensurate with the community’s assessment of its value. In the same regard, the community will not support or reward lackluster, opportunistic, also-ran, or hollow engagement in the long term.

I have to disagree with this. One of the characteristics of social capital is that it does NOT deplete with usage, and so I don’t connect how it “rises and falls with the market and the individual.” Then the last sentence, “social capital is measured by individual value” is also incongruous, because by definition social capital is not an attribute of individuals but a function of the relationships between agents.

I don’t want to spend any more time dissecting this. My main objective was to caution against equating social capital with reputation, because I think we’d lose a big opportunity. Social capital is a complex, amorphous concept, which to me makes it an entry point for conversation. These are the oft agreed upon characteristics:

– it’s a circular concept: social capital is both a characteristic of a flourishing society and a means of achieving it
– it’s embedded within networks, not individuals: comprised of trust, social norms, value-sharing, common objectives
– it’s not formed from rules and regulations, but from a set of ethical habits and reciprocal moral obligations

In the end, I think reputations are built on the foundations of social capital, but they are not equivalents. Social capital can be thought of as the fabric of society. You could even say that the psychological health of a nation is dependent upon it. That feels pretty important, so I feel an obligation to raise the level of discourse about it. The idea of whuffie points to the bigger picture, to a shift in thinking about how we want to behave as humans in business. As Tara herself pointed out, the message can quickly get misconstrued, the conversation shifts to ROI, and the question becomes “how do we make and leverage whuffie to make more money!!?”

That’s a lost opportunity for *actual* growth and change.

Talking about social capital is about having some pretty deep philosophical debates about the underpinnings of how we want to operate as a society, and the values we seek to emulate. How do we up the ante, engage in some plain talk, and push this conversation forward?

What is Social Capital?

153 thoughts on “Social Capital is not the same as Whuffie”