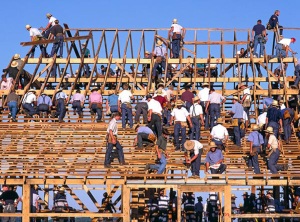 [This is a crosspost from Alpha Lo’s blog, Open Collaboration. Though he had a much catchier title for the post (“What I Learned From Venessa Miemis” – ha), I thought he did a great job listing some of the attitudes and behaviors helpful when trying to extend oneself, collaborate, and evolve. Alpha’s doing some amazing work in creating gift circles on the west coast. Check out the original post and comments here.]

I got on Twitter around November last year and started following the twitterings of a whole bunch of folk. I discovered a woman named Venessa Miemis and her blog www.emergentbydesign.com which was about systems theory, social media, networks, & community. They were very thoughtful posts in the blog that intrigued me quite a bit. And what was really interesting about this blog was that around that time at the end of 2009 there started being a huge amount of comments posted at the end of blog entries. Quite a number of the blog entries had an insane amount comments – well over the 100 mark. Reading through them took a lot longer than just reading the blog itself. And they were a wealth of material. Venessa had helped facilitate a whole community through her blog and tweets.

She then posted this insight she had of building an intelligent version of ChatRoulette, where people could engage in insightful and worldchanging conversation on these multiple video channels all over the world. It was to be called Junto and it would be like the people’s TED talks. The community around her self-organized to get this project off the ground and within a month it was already being prototyped and running in Alpha state on the web and generating a huge amount of interest.

In my own observations many people have great ideas but they never get implemented because they take a lot of work and coordination. In Venessa’s case though she had attracted an amazing community around her -professors, computer geeks, community weavers, futurists, social media, socially conscious folk etc.. and this community was full of resources to pilot and build this project. And there was a culture of listening & thoughtfulness that had been built that helped coordinate the actions. Together these people have helped grow Junto into an amazing open collaborative project that could have quite fruitful effects on how we as a society evolve.

My interests is in open collaboration – emergent, non-hierarchical, collaborative, open, networked, gift economy complex adaptive systems and how to grow these open collaboration projects – projects like Burning Man, Wikipedia, United Religions Initiative, open source software, and the Transition Town movement. And it seemed like here was this extraordinary example of something like that happening. From my studies and own experiments I know that many open collaborations and open source projects fail because people are not able to help facilitate enough of a communal process to make the thing work. For every Linux there are a 1000 failed open source projects. For every transition town movement there are a 1000 failed community sustainability movements. I had been studying theoretically a lot of open collaborations that had succeeded (and even put together a book on this subject) but it was rare for me to stumble upon an actual open collaboration that was in its nascent stages of growing into something big. There are many factors that have to gel to allow a collective intelligence to emerge and produce something. My spidey senses were awakened. How did she do it?

As I watched and then participated in this Junto and emergentbydesign phenomena I began to get a sense of what she was doing. Here are some of my observations :

1. Taking the time to reply to people – Whenever someone tweeted or commented she would reply. This allows the conversation and the relationship to build

2. See things from anothers perspective – Venessa had a beautiful ability to understand how the other person was thinking. She would see things from another’s perspective and be able to engage whilst holding both hers and the others perspective. This allowed the comment section to have a good flow on her site. People felt heard and were interested in further engagement. Even when she disagreed with the other person, there was a sense that the space could hold differing opinions.

Personally I was used to spending trying and fitting other’s people thoughts into my framework, and then trying to language my own thoughts so that others could understand it. But I spent a lot less time trying to understand how the other was thinking initially. Trying to see things from others perspectives is something I had tried and do more of over the last year, and now inspired by Venessa I focused on it even more. I did find it kind of hard – I had to put aside my thoughts for a moment, and figure out all the assumptions and worldview the other was coming in with and then see how they built their thoughts on top of that. But like many things that are initially hard I seemed to begin to get better at it as I practiced. And emotionally I found more stability in talking to people, I wasn’t so quickly reactive.

3. Invite others to join in – How do you get people to participate in your open collaboration/open source project? The answer lies in issuing the right invitation at the right time.

I had been reading Venessa’s blog and the comments on it for awhile but had never left a comment myself. Perhaps it felt a little disconnected. Whilst Venessa had sent me a friendly tweet once, it still felt like this was simply some strangers blog on the net that I had did not have much connection to. But we exchanged some more tweets, I got a tweet from her inviting me to post a comment to the unfolding Junto project. And so I posted. Having to think about what thoughts I would add to the project and adding them to the comment section I then began to feel more part of the mix. And I was now cross-fertilizing with others in this emergent vortex.

4. Reach out and connect. Build the human connection. – Having made these initial forays she then suggested we might meet when she came out to the west coast.

I met her at the Caltrain station and then we went to a nearby cafe to chat. She was younger than I thought (somehow when I read really intelligent thinkers I imagine them older than they are) , vibrant, and friendly. She seemed really nice, someone I would hang out with even if she wasn’t doing all these cool worldchanging projects. I am an energy worker/healer and can see and feel energies, and there was a kind of glow around her, and a sparkle to her whole field. On hanging out with her I could also see she had a whole spiritually awake side to her too and that she was growing quite fast as this Junto and emergentbydesign project unfolded.

And now that she and I are friends I am much more likely to contribute and be part of the openly collaborative Junto project.

5. Having conversations awakens the collective intelligence of the system to grow itself.

The day I met her at the cafe she also was visiting a number of others in San Francisco that she had met through twitter and her blog. By talking to people in person and online many interesting ideas, concepts, directions emerge. These conversations she was having with everyone helps bring in new resources and paths for the Junto project to grow.

There is an interesting field in complex systems theory called cellular automata. Imagine all these little interconnected cells interacting with their neighbours in rule-based ways. The sum connection of all these interactions can birth really complex phenomena even if the initial local interaction rules are very simple. The local interactions interact in a systems way to birth global patterns.

So it is with conversations, the interaction of all these local conversations can birth complex new patterns at the open collaborative project level.

6. Be vulnerable and allow yourself to be transformed.

One of the most beautiful things about following the Junto/emergentbydesign project is to see Venessa open up, share deeply. To see herself in her humanness. And to watch the transformation in her as she opens her being, and connects on a deep level with others.

And really thats probably the real reason to do open collaboration projects – to transform individually and collectively into higher states of being.

My open collaborative project which is about growing the gift economy through what we call gift circles. In a gift circle people share their needs and their gifts. People can then help each other by gifting each other computer work, massage, car mechanic help, cooking, babysitting etc. Its done without expecting anything in exchange. Its birthed a whole tribe as people care and look out for each other. This tribe/circle is open, emergent, non-hierarchical and a complex adaptive system.

In this gift circle project I decided to start experimenting more with this conversations with people approach. I had been reading all these design theories and thinking about how to design the next iterative stage of the gift circle, but what I hadn’t been doing was engaging with people in conversation as much. I had been having some conversations, and knew in the back of my mind it was important to have more conversations – what this did was refocus me more again to having conversations. There have been two hundred people that have flowed through our gift circle now, and a lot of talent and wisdom in it. So inspired by Venessa I started talking to people more, and also looking more at their talents. For instance I had been thinking about how to come up with the theoretical foundations of a gift economy myself, but I realized one friend also had an interest in economics so invited him to come up with some theories of it. As I talked to someone else, I realized they had the ability to build websites and were also interested in building a website for our gift circles. I talked to my old roommate who was a permaculture designer, and she enlightened me more into how you can use the permaculture design process within the gift circle to help take it forward. I also talked to people outside the circle. In the past I might have simply tried to see what value they could add to my project. But instead this time I begin to try to the world their eyes. And as I did a connection between us more organically emerged than if I had just asked for their help in my project.

17 thoughts on “6 Tips for Open Collaboration”