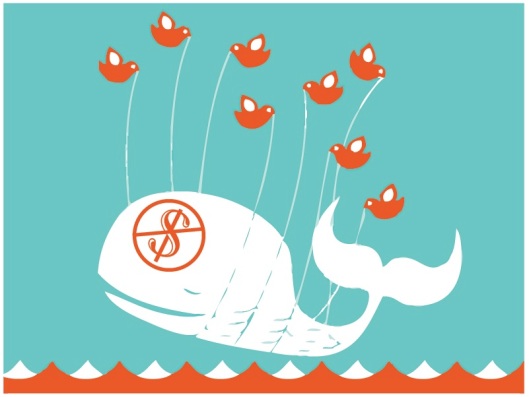 Maybe it was sparked by a new course I’m taking on digital media strategy, or some recent data on Twitter users and engagement,  but it got me to thinking about the big question of how Twitter is going to make money. I’ve come to the conclusion that advertising simply won’t work. Two reasons:

#1 – the domain where conversations happen is sacred

OK, ‘sacred’ might be a bit mystical, but think about it – we’re social creatures, and we’re practicing our fullest expression of being human when we’re engaging with others. Whether it’s exchanging tips, ideas, or gossip, the ability to share ourselves with another person is what being alive is all about. People refuse to have their space violated at that most fundamental level – where conversations happen – and the current online version of that space is Twitter.

It’s one thing to be marketed to when you’re in a car and you pass a billboard, or when you go to the store and are bombarded by brands, or when you’re watching TV and a commercial comes on (it’s actually a welcome snack/bathroom break). But it’s another when you’re in the middle of a conversation.

Monetizing Facebook is a little different, because the communication that’s facilitated there is often asynchronous. When you’re commenting on a friend’s status update or scrolling through their photos from last night, you’re not directly interacting with them. Your user behavior is essentially “browsing,” so seeing an ad off to the side feels slightly less offensive. In a sense, it’s like window shopping or trying on stuff at the mall; you’re kind of checking things out, but not fully committed. You expect to see advertising, but mostly ignore it anyway.

But then you swing by the food court with your shopping buddy, grab a bite, and decide to shoot the breeze for a bit. At that point – you’re engaged. You’re communicating with another person. If someone comes up to you mid-conversation and tries to sell you something, your resulting emotion will probably be anger or incredulity about the interruption.

So if Facebook is the mall, Twitter is the food court. It’s different. It’s real-time. Sure, you still browse information that’s slightly dated (when scrolling through someone’s tweetstream), but for the most part, you’re watching people’s thoughts around the world manifest in real time. You’re talking to them. Exchanging links, stories, ideas. You’re learning, sharing, BEING HUMAN. It’s a global conversation arena, where we’re beginning to understand each other, build empathy, gain insights, and create new solutions.

Are you ok with being marketed to in that space?

Second point – you’re probably aware that for the current price of free, you are already able to advertise on Twitter. Unfortunately, it’s not as easy as paying money to be able to slap up an ad that will appear on my sidebar. (I’d ignore it anyway) You have to actually ENGAGE with your potential customers. And that takes time and effort.

If you’re currently using your account as a broadcast channel – pushing ads instead of having conversations – you’re missing the point. You have the opportunity to attend “the world’s largest cocktail party,” and build trust, meaning, and value through consistent interaction with your audience. In turn, they will recommend you, retweet you, and your presence will have network effects. But that means you have to actually prove your worth and start building relationships by being honest, open, and helpful. It requires you to stop being a corporate entity and start being a human.

Ultimately, the game has changed. Each of us is a node in the network now, with our own capacity to reach and influence, and to make (or break) connections at will. Your ability to impact others is a measure of the value you bring them, not the size of the ad you thrust in their face.

I have no idea. The problem is that Twitter is a conversation, and trying to monetize conversations is hitting just a little too close to home. Whatever business model they devise, it’s going to have to be something innovative – because as soon as they introduce advertising, someone will just build the next Twitter, ad-free, and we’ll all go there.

23 thoughts on “why monetizing twitter [with ads] won’t work”