this is the second post in a series to highlight the people and projects coming together at this year’s Contact Conference, Oct 20, 2011 in NYCOne of the big areas we’ll be highlighting at Contact is ‘next net’ technologies – hardware and software tools that bring people internet access and the ability to connect, communicate and share information without the risk of censorship or shut-down.Below are just a few of the people and projects we’re looking forward to bringing together this October:
***Aaron Huslage :: Tethr

How does Tethr work?

Tethr.us, will provide satellite-based Internet access, GSM service (SMS), and wifi connectivity in one box. It will be portable, easy to hide and very very easy to use anywhere in the world. We are also starting up a foundation – tethr.org – to be funded primarily by the profits of Tethr, which will own all intellectual property and be tasked with managing social activities such as product donation, external development and funding of additional external product development.

The technology we’re putting in the tethr.us box is off-the-shelf kit (BGAN modem, openBTS GSM Basestation, Panda board, etc). Our “secret sauce” comes from putting the user first. This thing has to be really really easy for someone to plop down, open up and use with little or no training. Current solutions are almost universally disliked for their usability alone, we can fix that.

What inspired you to take on this project?

The seed of Tethr was planted when I helped build a wireless network that eventually spanned from Gulfport, Mississippi west to the Louisiana border. The infrastructure we built was fabulous, but it took weeks of work, tons of people and loads of donated equipment to get built-out. People on the ground needed something temporary between the time of a crisis occurring and when the permanent infrastructure (or its replacement) came online.

I waited for years to see if someone more knowledgeable than I about such things, but no one bit.

Internet access is no longer an option for people effected by crises. Journalists, first responders, community support organizations, among others all need access as soon as possible after a crisis occurs. Without access people can’t apply for assistance from governments, file important stories, connect with their logistics team or sometimes even contact loved ones to let them know they are safe. Voices shouldn’t be silenced due to natural disaster or political whimsy.

Patrick is is the Director of Crisis Mapping at Ushahidi, a non-profit tech company that develops free and open source software for information collection, visualization and interactive mapping. He’s also the co-founder of the International Network of Crisis Mappers and the Standby Volunteer Task Force for Live Mapping.What is the Standby Volunteer Task Force?The Task Force is a global network of more than 500 volunteers from more than 50 different countries who are trained in live crisis mapping.

How has the Task Force aided disaster response efforts?

When the Haiti earthquake struck in early 2010, volunteers ended up creating what the head of FEMA said was the most comprehensive and up-to-date map available to the humanitarian community, see slide #24:

Thanks to this live crisis map, first responders were able to save hundreds of lives. But creating said map was really challenging, we had to train hundreds of volunteers from scratch. We were reactive as opposed to pro-active. In early 2011, the UN asked us to create a live crisis map of Libya so they could plan their humanitarian relief operations. This time, we didn’t have to start from scratch because we had the Standby Volunteer Task Force, so we were able to map a lot more in a shorter period of time. Thanks to this, the World Food Program and other UN agencies were able to use our map to better inform their humanitarian relief operations on the group. See slides #44, #45. The UN itself does not have the capacity or the skills to create these live crisis maps, so this is why the Task Force matters. Moreover, the Task Force shows how anyone around the world can help in times of disasters and crises simply by being on their computer.

What drives you to do this work?

I am continually inspired by what ordinary people can do when they have access to free and open source technologies like the Ushahidi platform, which is the technology used to create the crisis maps described above. So it is the volunteers of the Standby Volunteer Task Force who inspire me to do more.

Adam is the founder of Brave New Software and LittleShoot, a decentralized, encrypted, open source and standards-based platform for an Internet with fewer points of control. His current project is the P2P censorship circumvention and monitoring tool Lantern.How does Lantern work?

Lantern takes a new approach to circumvention in that it’s massively decentralized. It’s a cooperative global network along the lines of SETI@home, but where you’re contributing your computing power and bandwidth to solve global censorship instead of searching for extra terrestrial life. Lantern’s P2P architecture is exciting on a technological level but also on a human level. If you have a computer and an internet connection and live where the internet is unfiltered, you can help people living under censorship just through simply installing Lantern. You can think of it as similar to joining a Facebook group, but where the act of joining — installing Lantern —
has immediate and tangible benefits for the cause.

What are the opportunities of social technologies?

I’m personally wary about placing too much emphasis on social technologies, to be honest. Myles Horton used to say “Keep your eyes on the stars and your wagon wheels on the ground,” and there are many variants of that quote. To me, much of the emphasis on social technology is too focused on the stars. Social technologies can clearly strengthen the social fabric, particularly strengthening weak ties, but there’s a sexy and glamorous element to it I find misleading and distracting. E-mail, the cell phone, and television are probably still the most powerful “social technologies,” but no one talks about them because they don’t grab the headlines in the same way as Twitter and Facebook. Al Jazeera was far more important than Twitter and Facebook in helping spark the recent uprisings across the Near East in my view, and I’ve never seen an analysis of the role of the cell phone in organizing the protests. My guess is that it was orders of magnitude more important than Twitter. This is especially clear in countries like Yemen where around 2% of the population has access to the Internet.

What drives you to do this work?

I’ve always felt that many of the world’s problems are due to a lack of awareness — the result of miscommunication at a basic level. I also feel strongly that decentralized networks are generally more robust and healthier than centralized ones because they make it harder to constrain and control communication. To me, P2P is largely about removing concentrations of power and points of control, freeing data to flow more freely. Lantern exhibits this clearly. Its distributed nature makes it extremely difficult for authoritarian regimes to place artificial blocks on the exchange of information. The idea is for a healthier society to ultimately emerge, but then again, who am I to say?

Isaac is launching the Free Network Foundation, an organization whose purpose is “to steward the creation of a censorship-proof, disruption-resistant, global peer-to-peer network.” He’s passionately advocating for a movement away from top-down corporate infrastructure and towards a communications system which is organic, bottom-up, and cooperative. He’s also involved with Diaspora and the FreedomBoxproject.Why does a free network matter?A participatory, cooperative network is the only way to ensure that everyone has a voice. A free network is more affordable, more accessible, and more in line with democratic values. As it stands today, we are beholden to the will and whim of our internet service providers, telecommunications companies, and social networks. It is far too easy for these entities to be coerced into repressive and authoritarian patterns of behavior. What’s more, centralized network architectures are highly susceptible to natural disaster.

What do you see as the promise of social technologies?

Social technologies, when they are engineered and utilized properly, offer the opportunity to connect, share, and organize on a scale that has never been realized. If they are engineered or utilized improperly, however, they present an opportunity for the monetization of our identities, the invasion of our privacy, and the erosion of those liberties we so profess to prize. 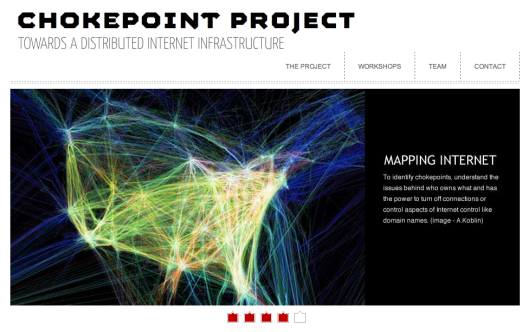 Sam is a member of the Future Forward Institute, a think tank focused on helping groups integrate social software, open and collaborative design, and deployment practices. He’s currently working on the Chokepoint Project, co-writing a book about The Five Commons, and developing intelligent distribution systems for locally produced foods in the Great Lakes region of the US.The Chokepoint project ?Chokepoint project is a really ambitious attempt to create a way to understand the physical realities of the dynamic internet. The goal is in part to visualize, but also to create an ongoing impression of hard data that people can use to understand how and where to route around bottle necks and “chokepoints”. This is a really valuable project that grew out of the Peer to Peer Foundation.
find sam on twitter @SamRose
***
These are just a few of the amazing folks coming to Contact – stay posted for more updates about our participants. If you’d like to join us at the event, please register here! You can also follow updates on twitter @contactcon

3 thoughts on “Contact Spotlight Series: Builders of the Next Net”