I tapped the twittersphere the other day for the best books on the ‘future of money’ and the new/emerging economy & infrastructures. Here’s what you came up with. Attribution below each book. Other suggestions welcome! I’m getting ready for a deep dive into this content area this fall, and appreciate all the guidance you can provide!

1. The Future of Money – Bernard Lietaer

Random House Press Release: A brilliantly clear-sighted analysis of how on-going money innovations in dozens of countries around the world are proving that they can resolve key societal problems such as: jobless growth, community breakdown,  the economic consequences of an aging society, the conflict between short-term financial thinking and long-term sustainability, and monetary instability itself. This book provides pragmatic solutions to each one of these issues.

3. Agenda for a New Economy: From Phantom Wealth to Real Wealth – David Korten
tweeted recommendation via @complexified
from amazon: Today’s economic crisis is the worst since the Great Depression. However, as David Korten shows, the steps being taken to address it do nothing to deal with the reality of a failed economic system. It’s like treating cancer with a bandage. Korten identifies the deeper sources of the failure: Wall Street institutions that have perfected the art of creating “wealth” without producing anything of real value: phantom wealth. Our hope lies not with Wall Street, Korten argues, but with Main Street, which creates real wealth from real resources to meet real needs. He outlines an agenda to create a new economy– locally based, community oriented, and devoted to creating a better life for all, not simply increasing profits. It will require changes to how we measure economic success, organize our financial system, even the very way we create money, an agenda Korten summarizes in his version of the economic address to the nation he wishes Barack Obama were able to deliver.

4. The New Economics for Industry, Government, Education – W. Edwards Deming
tweeted recommendation via @complexified
from amazon: “… competition, we see now, is destructive. It would be better if everyone would work together as a system, with the aim for everybody to win. What we need is cooperation and transformation to a new style of management.”In this book W. Edwards Deming details the system of transformation that underlies the 14 Points for Management presented in Out of the Crisis. The system of profound knowledge, as it is called, consists of four parts: appreciation for a system, knowledge about variation, theory of knowledge, and psychology. Describing prevailing management style as a prison, Deming shows how a style based on cooperation rather than competition can help people develop joy in work and learning at the same time that it brings about long-term success in the market. Indicative of Deming’s philosophy is his advice to abolish performance reviews on the job and grades in school.previously published by MIT-CAES

5. Walk Out Walk On: A Learning Journey into Communities Daring to Live the Future Now – Margaret Wheatley
tweet recommendation via @complexified
from walkoutwalkon site: In Walk Out Walk On, authors Meg Wheatley and Deborah Frieze invite you on a learning journey to seven communities around the world to meet people who have walked out of limiting beliefs and assumptions and walked on to create healthy and resilient communities. These Walk Outs Who Walk On use their ingenuity and caring to figure out how to work with what they have to create what they need.

6. The New Capitalist Manifesto: Building a Disruptively Better Business – Umair Haque
tweeted recommendation via @complexified
from amazon: In this manifesto-style book, radical economist and strategist Umair Haque calls for the end of the corrupt business ideals that exemplify business as usual. His passionate vision for “Capitalism 2.0,” or “constructive capitalism,” is one in which old paradigms of wasteful growth, inefficient competition, and self-destructive ideals are left far behind at this reset moment. According the Haque, the economic crisis was not a market failure or even a financial crisis, but an institutional one.

7. The Gupta State Failure Management Archive – Vinay Gupta (ok, this one is not a book.)
tweeted recommendation via @leashless
4.3gb of files on State Failure and contingency management released into the public domain athttp://Archive.org by Vinay Gupta. The Archive focuses on physical infrastructure like water plants and power stations, and on how we govern those assets at both a practical and a political level. It is designed to highlight the governance questions around running critical infrastructure during long emergencies like financial collapses, but applies equally well to trying to puzzle out how to manage our 21st century economies and their complex technical assets.

8. Debt: The First 5,000 Years – David Graeber
tweeted recommendation via @hewhocutsdown
from amazon: Every economics textbook says the same thing: Money was invented to replace onerous and complicated barter systems—to relieve ancient people from having to haul their goods to market. The problem with this version of history? There’s not a shred of evidence to support it. Here anthropologist David Graeber presents a stunning reversal of conventional wisdom. He shows that for more than 5,000 years, since the beginnings of the first agrarian empires, humans have used elaborate credit systems to buy and sell goods—that is, long before the invention of coins or cash. It is in this era, Graeber argues, that we also first encounter a society divided into debtors and creditors. 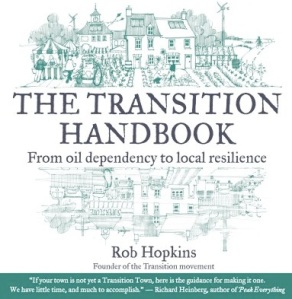 9. The Transition Handbook: from oil dependency to local resilience – Robin Hopkins
outline of book with notes
tweeted recommendation via @jdevoo
from amazon: We live in an oil-dependent world, and have got to this level of dependency in a very short space of time, using vast reserves of oil in the process – without planning for when the supply is not so plentiful. Most of us avoid thinking about what happens when oil runs out (or becomes prohibitively expensive), but The Transition Handbook shows how the inevitable and profound changes ahead can have a positive outcome. These changes can lead to the rebirth of local communities, which will grow more of their own food, generate their own power, and build their own houses using local materials. They can also encourage the development of local currencies, to keep money in the local area.

10. Local Money: How To Make It Happen In Your Community – Peter North
tweeted recommendation via @jdevoo
from amazon: Local Money is an exciting and practical guide to creating local currencies – showing how they can help us unleash the power of our communities to build a resilient economic future. The economic crisis and the bailing out of the banks by taxpayers has made us all aware of the vulnerability of our financial system. We need to think urgently about how to reclaim the power that the bankers hold. In past recessions and depressions across the world, communities have done just that – by creating their own forms of money. Local Money shows how this is possible. This book is an inspiring guide that helps you understand what money is and how you can create money that stays in the community – building loyalty between consumers and local traders rather than losing wealth to the corporate chain stores. It explains how alternative currencies can work with local banks and credit unions to strengthen the local economy, supporting the local production of necessities such as food and energy while helping to reduce the community-s carbon emissions. Local Money draws on the long history of local currencies, from Local Exchange Trading Systems and -time banks- to paper currencies such as BerkShares, Ithaca -Hours- and German regional currencies, which circulate between local businesses as an alternative to their losing trade to the -big box- retailers. The story culminates in the development of the first Transition currencies, the Totnes, Lewes, Stroud and Brixton Pounds.

11. Beyond Civilization: Humanity’s Next Great Adventure – Daniel Quinn
tweeted recommendation via @sedicious
from amazon: Futurist Daniel Quinn (Ishmael) dares to imagine a new approach to saving the world that involves deconstructing civilization. Quinn asks the radical yet fundamental questions about humanity such as, Why does civilization grow food, lock it up, and then make people earn money to buy it back? Why not progress “beyond civilization” and abandon the hierarchical lifestyles that cause many of our social problems? He challenges the “old mind” thinking that believes problems should be fixed with social programs. “Old minds think: How do we stop these bad things from happening?” Quinn writes. “New minds think: How do we make things the way we want them to be?” 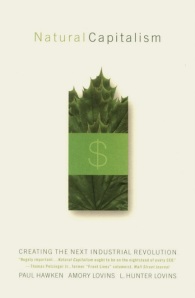 12. Natural Capitalism: Creating the Next Industrial Revolution – Paul Hawken
tweeted recommendation via @sedicious
from amazon: Hawken (The Ecology of Commerce) and Amory and Hunter Lovins of the Rocky Mountain Institute, an environmental think tank, have put together an ambitious, visionary monster of a book advocating “natural capitalism.” The short answer to the logical question (What is natural capitalism?) is that it is a way of thinking that seeks to apply market principles to all sources of material value, most importantly natural resources. The authors have two related goals: first, to show the vast array of ecologically smart options available to businesses; second, to argue that it is possible for society and industry to adopt them. Hawken and the Lovinses acknowledge such barriers as the high initial costs of some techniques, lack of knowledge of alternatives, entrenched ways of thinking and other cultural factors. In looking at options for transportation (including the development of ultralight, electricity-powered automobiles), energy use, building design, and waste reduction and disposal, the book’s reach is phenomenal. It belongs to the galvanizing tradition of Frances Moore Lapp?’s Diet for a Small Planet and Stewart Brand’s The Whole Earth Catalog. Whether all that the authors have organized and presented so earnestly here can be assimilated and acted on by the people who run the world is open to question. But readers with a capacity for judicious browsing and grazing can surely learn enough in these pages to apply well-reasoned pressure. 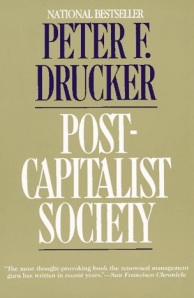 13. Post-Capitalist Society – Peter Drucker
tweeted recommendation via @mikeriddell62
from amazon: Drucker’s vision of a “post-capitalist society”–one in which knowledge is the basic resource and nation-states compete with transnational, regional and tribal structures–is hardly original. What is new in this invigorating essay is his far-reaching analysis of the economic crisis of militarized, wasteful “megastates” like the United States and the former Soviet Union, which have failed to bring about a meaningful redistribution of income. Improving American productivity, he writes, will require investment in human resources and infrastructure (as Japan, Germany, Korea and Taiwan have done) and a drastic restructuring of organizations, including the elimination of most management layers. The federal goverment, Drucker asserts, should contract out tasks in the social sphere, confining itself to the role of policymaker. Among his other provocative proposals: jettison military aid to other countries; create a public audit agency to eliminate pork-barrel deals and special-interest politics; and hold schools accountable for students’ performance. He also urges the creation of transnational institutions to cope with the environment, terrorism and arms control.
—
update:
The Lights in the Tunnel – Martin Ford (free eBook download) via @keirholl
–
Key Books from the P2P Foundation website – via @mbauwens
—
please share your recommendations!

Leave a Reply to Get Your Ex Back Cancel reply