I just saw an article from the NY Times – Bloomberg, on Radio, Raises Specter of Riots by Jobless– with the NYC mayor hinting that the combination of enormous public debt and high unemployment could lead to rioting, as we’re currently seeing in other parts of the world.As I’m looking at this article, I’m also preparing my ‘future of money’ talk for SIBOSin Toronto next week, where I’ll have just a few minutes to paint a picture for the bankers about where the future may be heading.I’ve been trying to think about how to frame it, because it’s bigger than just talking about banks being disintermediated due to mobile payment platforms and peer to peer technology. There’s a larger discussion to be had about the nature and design of currency itself, its inherent biases towards certain types of behavior, and its impact on living systems. There’s also a story about the human desire to redefine what wealth means and to be empowered to create local economies that are biased towards cooperation and abundance.

It would seem, based on many of the things I’ve been reading, that allowing a variety of parallel currency systems to emerge would help meet the needs of people in these rough economic times, provide jobs, and create options for how value is created and exchanged. I don’t imagine it to be a panacea for all our problems (the system’s way too complex for that), but I do find cause for evidence-based optimism. There are some interesting historical precedents of local currency solutions being highly effective, and some scary implications of what happens when you take away this ability for people to help themselves. Allow me to share a bit I’ve been reading in Bernard Lietaer’s book, The Future of Money:

First, he gives a nice description of the socio-political consequences of what he calls “the vicious circle of unemployment.”

(I love reading about feedback loops. So much of our thoughts and behaviors are based on the programming and conditioning of the space between our ears, and you can just look at how we’ve responded in the past to similar situations to get an idea of what’s going to happen in the future.)

Lietear then gives examples of how we’ve seen this cycle over and over throughout history, and what people do about it. Since there is really no shortage of work to be done, and no shortage of people willing and capable of doing the work, the issue is that there’s just no money to incentivize people to do it. So, how about changing the monetary framework?It’s been shown to work, time and again. Here’s a story about the German ‘Wara’ system:

As a response to the hyperinflation period in Germany in the 1920s, a monetary experiment took place in the small town of Swanenkirchen. A coal mine owner, faced with the closing of the mine, created a new currency called Wara, which was backed by the coal inventory. A monthly demurrage tax was implemented, which disincentivizes hoarding and keeps money circulating within the community. The coal mine workers agreed to accept 90% of their pay in Wara, and other merchants in town agreed to accept Wara as payment for goods and services.

The currency worked so well that it began spreading until over 2,000 corporations in Germany were using it. The central bank perceived a threat, and in October 1931 the Ministry of Finance decreed the Wara illegal. Consequently, the coal mine shut down, unemployment went up again, and social unrest increased.

Broadly, people were prohibited from using the solutions they had created to help themselves, and so the only alternative was to seek a savior or a strong centralized solution. [one could argue this created favorable conditions for Adolf Hitler]There’s a nice graph in the book showing the direct correlation between the level of unemployment and the percentage of seats captured by National-Socialism in Germany in the elections between 1924 and 1933, highlighting step #4 in the above loop of unemployment and political extremism. 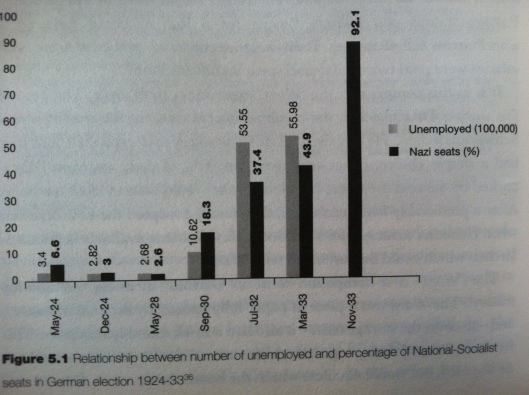 The chapter then continues with many examples of alternative currency designs and implementations, like the Worgl stamp scrip, US Depression scrip, the Swiss WIR, mutual credit systems like LETS and Time Dollars, currencies designed to boost regional economic development, others designed for financing small businesses, and yet others as local loyalty schemes.(shameless plug for Contact Conference: this stuff is all alive and well today, though admittedly, still on the fringes of society. at next month’s conference, we have several people coming to represent their projects in this space – Caroline Woolard of OurGoods, a barter network for the creative community in nyc, Guillaume Lebleu of Bernal Bucks, a debit card that earns points redeemable at local merchant shops in the neighborhood of Bernal Heights in San Francisco, Art Brock of The Metacurrency Project, an attempt to create the infrastructure for digital currency interoperability, and Matthew Slater of CommunityForge, a Drupal-based mutual credit platform that runs many of the LETS and TimeBanking communities.)

This is all very interesting to me. A few years ago when I heard of the idea of complementary currencies, I thought it was radical. Now, it just seems to make a lot of sense.Why have only one type of currency, designed with its inherent biases, to carry out all the functions of a society? Why not devise different mechanisms optimized for different kinds of flows, behaviors, and outcomes?

Our current national monetary system operates on interest-bearing money designed for a growth-based economy. It has a variety of systemic flaws baked into its very DNA, which I will save for another post, but here’s a nice article from the Journal of Financial Transformation that can provide an overview of those. But there’s certainly room for the creation of a balanced, integral economy.

If the current system operates in the realm of financial capital and physical capital, (good for commercial transactions), created by central authority and encouraging a mentality of scarcity and competition, then to balance that out, we can have parallel systems that operate in the realm of social capital and natural capital, (good for community transactions), created by the participants themselves, and encouraging a mentality of cooperation and abundance.

So that kind of addresses some ideas around retooling currencies in time of depression/recession. The other argument to be made in support of parallel currencies is in thinking about the future of jobs and work, fundamentally. 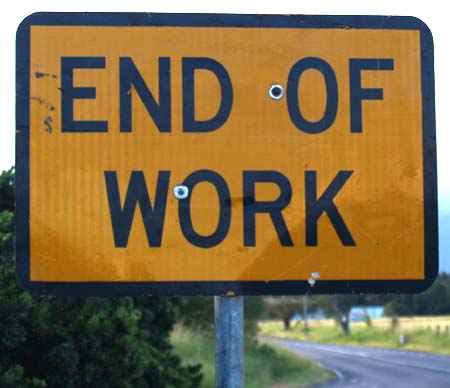 This part is a story about accelerating technological change. Especially in developed nations, our technologies are leading to unemployment that isn’t just a temporary situation, but a permanent restructuring process of how the system operates. Here’s a nice futuristic quote by economist John Maynard Keynes from about 80 years ago:”If the economic problem [the struggle for subsistence] is solved, mankind will be deprived of its traditional purpose… Thus for the first time since his creation man will be faced by his real, his permanent problem…There is no country and no people, I think, who can look forward to the age of leisure and abundance without a dread. It is a fearful problem for the ordinary person, with no special talents to occupy himself, especially if he no longer has roots to the soil or in custom or in the beloved conventions of a traditional society.”

This, I think, is what Douglas Rushkoff was getting at in his controversial opinion piece on CNN.com last week, Are Jobs Obsolete?

And sure, we don’t yet have all our basic needs fulfilled, we don’t have free energy, we don’t have nanotechnology-powered 3D printers. But, it’s getting to the point where there’s enough “stuff.” Some of our biggest problems are in the misallocation of resources and poor coordination. So silos break down, organizations become more distributed and decentralized, information technology continues to gallop forward, sensors are embedded in our environments and reporting data, and supply chains increase in efficiency.  As we get better at doing more with less, what are all the extra people going to do? Well, many would rather spend their time doing work that meaningful, creative, and fulfilling anyway, but we don’t have the language and the infrastructures to support it yet. (What would an “innovation currency” look like?)

Then there’s the other aspect of accelerating technological change. Increasingly powerful devices available at decreasing cost, connected to the internet, in billions of people’s hands around the world.

So now we have this potentially liberating information and communication technology, the ability to better express needs and resources and make more accurate real-time simulations of the world around us, connect to each other on a global basis, and engage in transactions based on currencies designed and optimized for specific functions.I mean… that’s a gamechanger for how the whole world operates.
So, this all suggests the possibility for a more intelligent kind of economy, more harmonious with human beings and the real physical world, and one that makes transactions more fluid and frictionless. If centralized control structures turn out to a bottleneck, they will be circumnavigated in favor of better solutions. (Is it cheaper to send money internationally via Bitcoinor wire transfer?) Perhaps we will decide to redefine wealth, and measure the health of our economies beyond just how much money flows through them. When we have a multitude of currencies that reflect various quality of life indicators, better metrics, humans can be incentivized towards a richer expression of values and behaviors. We may even decide that building culture and communities of cooperation is a good thing, a sentiment which is still in many ways anathema to the design of the current system.Now how to describe this to the bankers in under five minutes…

50 thoughts on “Why the Future of Money Matters (Is the current system obsolete?)”